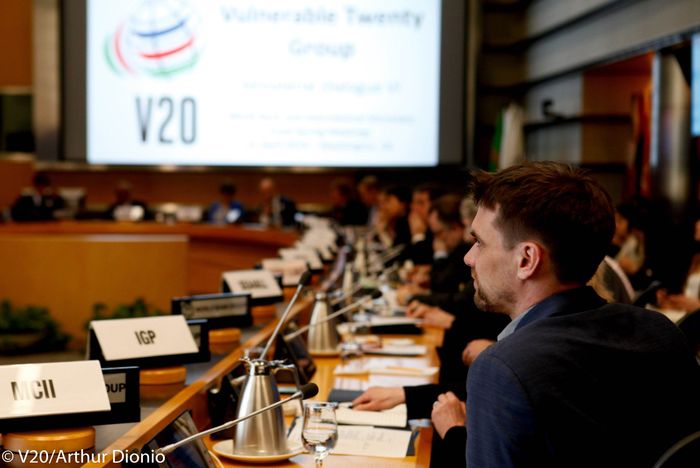 Finance Ministers from the V20 Group of vulnerable economies announced new financial instruments in collaboration with international partners at the Spring Meetings of the World Bank Group and International Monetary Funds.

The V20 Group of Finance Ministers is a dedicated cooperation initiative of economies systemically vulnerable to climate change. The V20 announced ambitious commitment to achieve energy transition and resilience of their economies in line with the most ambitious climate protection scenarios. It is currently chaired by the Republic of Marshall Islands.

In furthering the ambitions of the group, the V20 announced the preparation of two decisive initiatives during the WB & IMF Spring Meetings: Firstly, the V20 has proposed the Accelerated Financing Mechanism (AFM) for Maximal Resilience & a 100% Renewable Energy Transition to upscale existing risk mitigation tools, guarantees and blended finance facilities, and a new menu of instruments within MDBs and other development banks for adaptation, resilience and renewable energy projects.

Secondly, the Sustainable Insurance Facility (SIF), intends to promote private sector insurance uptake to address climate risks and promote low-carbon development. It seeks to support the provision of financial protection instruments that strengthen the resilience of micro, small and medium-sized enterprises (MSMEs), including of the various vulnerable groups along the supply chain. The V20 sees the SIF as a tool that can crowd in investments in risk reduction, enhance credit access, and better manage public contingent liabilities related to social resilience.

During the round table discussions on the 12th of April both representatives from V20 economies, partners from G20 countries, and heads of international agencies, discussed these concepts and highlighted the need for V20 countries to further press the international agenda especially in the run-up to the UNSG Climate Summit in New York. The risk finance agenda is a key item – underpinned by the V20 contributions, and the V20 chair’s role towards the InsuResilience Global Partnership (IGP) on Climate and Disaster Risk Finance and Insurance Solution. During the roundtable the IGP was mentioned as a primary example of existing V20 leadership.

MCII is a supporting partner to the V20 on the financial protection agenda and contributed to the round table.