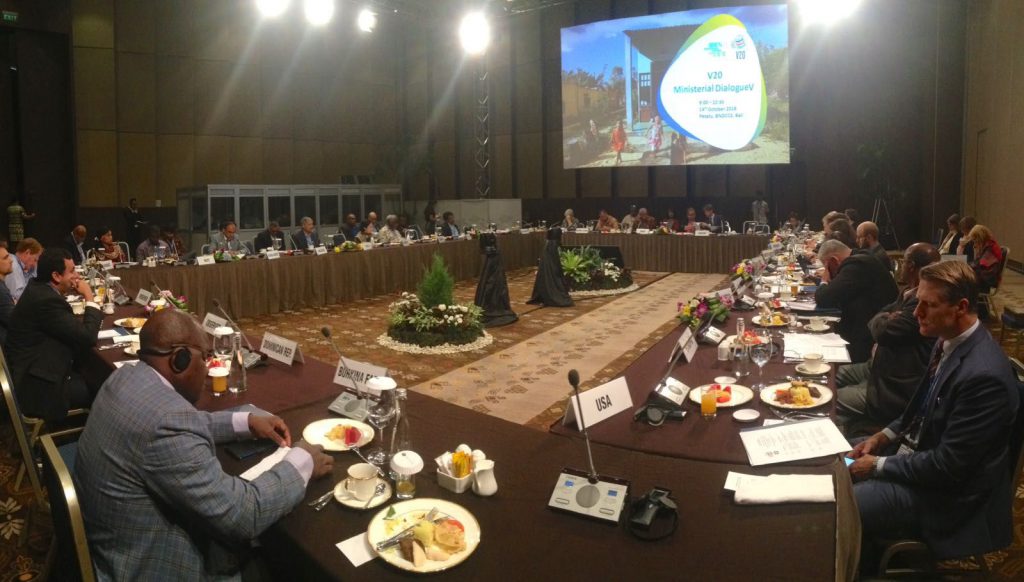 Building on the progress reached since the last V20 Focus Group Meeting in August in Addis Abeba, V20 member countries re-convened in Bali for their Fifth Ministerial Meeting and their Second Dialogue with High-level G20 Representatives. The meetings gathered significant momentum and are bound to result in more ambitious climate action in the run up to 2020, including gathering more support during other high level meetings along the way, such as the upcoming Climate Vulnerable Forum Virtual Summit in November, at COP24 in Catovice, in December, and the Climate Summit in 2019.

Held in conjunction with the Annual Meetings of the World Bank and the International Monetary Fund, the V20 Finance Ministers urged the global financial community and particularly G20 member countries to begin moving from words to action and proactively address the risks and opportunities climate change bears for the financial system and the world economy.

In their statements, the V20 countries pointed to the most recent IPCC Assessment Report (AR6) published just days before, to explain why shifting financial flows and by that the real economy towards 1.5°C aligned investments will substantially reduce climate risks and improve economic growth scenarios. Doing so, however, requires meaningful commitments and actions by G20 countries, including for industrialized states to follow up on their USD 100 billion climate finance pledge, as well as stronger cooperation between the V20 and the G20 Groups.

Unlocking investments for countering climate change relays to both – facilitating the climate resilient and low carbon transition of V20 economies, so that their populations not only merely survive, but thrive. V20 countries highlighted the InsuResilience Global Partnership as the first of its kind strategic collaboration between the V20 and the G20 to address climate risks through insurance and other financing instruments. Similar arrangements for other issues areas, including enabling the low carbon energy transition and building the necessary capacities across V20 economies need to follow.

Already, the V20 are advancing with implementing domestic carbon pricing mechanisms and the development of innovative financing mechanisms to help protect and build climate-friendly and resilient economies. The envisioned V20-led Sustainable Insurance Facility (SIF), a mechanism for technical assistance with implementation at the country level, is aimed at facilitating insurance solutions protecting vulnerable population segments, but also structurally relevant industries vulnerable to climate change as well as MSMEs. This is considered essential to shielding V20 economies from being locked in at development levels way below their growth potential and keeping them from realizing significant societal benefits economic advancement has to offer. For the SIF, the V20 is looking to deepen cooperation with existing structures such as the InsuResilience Global Partnership and Global Risk Financing Facility (GRiF) that was launched in Bali. The Accelerated Financing Mechanism, a second financing initiative currently under way, aims to leverage available multi-lateral and bi-lateral funding to make private sector investment viable for core national priorities on resilience building and 100% renewable energy.

Germany, as one of the leading G20 members of the InsuResilience Partnership reaffirmed its commitment to the objectives of InsuResilience and to working with the V20 to drive forward the use of climate and disaster risk financing instruments.

The Bali meetings demonstrated the commitment, the ambition and the willingness of the present V20 and G20 countries, but also the substantial work that remains. H. E. Brenson S Wase, Finance Minister of the Republic of the Marshall Islands and current V20 President made this very clear, when he highlighted the existential threat posed by climate change and urged the G20 to “deepen international collaboration to hasten the world’s transition to climate-resilient and low carbon development.” In the upcoming months, both groups urgently need to follow suit. MCII, as one of the technical support partners for the V20 during their meetings in Addis Abeba and Bali, is also committed to keep engaging with the V20 on advancing this critical work.